Which web browser is best for you? 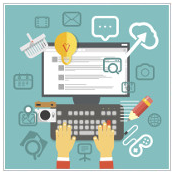 The web browser battle has been raging for decades. The feud between Internet Explorer and Netscape has long since passed, and now we’re dealing with a much larger field of competition. Today, there are at least four browsers vying for domination, and we’ve broken down each one by its pros and cons.

By just about any metric, Google Chrome has been the browser of choice for most internet users over the last couple years. It’s easy to use and its graphics interface has a low profile. However, if you want to customize Chrome with extensions and apps, there are more than enough options. The bottom line is: this is the best browser for users who spend a lot of time in G-Suite documents, or want the security benefits of frequent patches and updates.

We might as well start off with the one, glaring drawback of Safari: It’s available only to Apple users. However, if you are working on a macOS or iOS device, Safari has a lot going for it. Ad blocking is built right into the browser, as well as RSS support for aggregating lots of information in one place. And because tabs can be automatically synced across all your Apple devices, we highly recommend Safari for anyone in a Mac environment.

Note that Edge is a different browser than Internet Explorer. The latter still exists, but we’ve decided to skip it for various reasons. Although Edge works only on Windows 10 systems, it has two things going for it. First, Microsoft has announced a feature that will incorporate virtualization into Edge to quarantine downloads for testing before they’re opened on your computer. Second, the Windows 10 browser comes with some fantastic Office 365 integrations. We highly recommend Edge for users working in a business enterprise environment.

We’ve saved the most controversial for last. The Opera browser isn’t one of the most popular browsers available, but it does deserve consideration. Although it requires more customization and under-the-hood-work than its competitors, its privacy settings are unmatched. With a built-in virtual private network feature and some of the most robust ad blocking on the market, Opera is a great way to take a break from cookies and targeted advertisements.

Choosing a web browser may seem like such an inconsequential thing, but just think about the rate of cloud adoption. If you plan on utilizing more software-as-a-service solutions in the coming years, one tiny feature in a browser could make all the difference. Contact us today about planning your cloud deployment over the coming years.